Warning: Parameter 2 to qtranxf_postsFilter() expected to be a reference, value given in /home/customer/www/virtualstages.eu/public_html/wp-includes/class-wp-hook.php on line 308
 The Plays 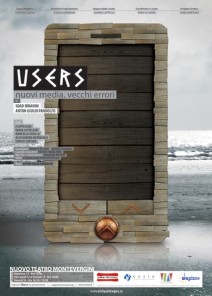 Retracing the classical – Greek cultural path and peeking into myths and legends, we found unexpected advices and lessons usable for talking about our times, young people and new technologies that see them as protagonists.

This is how we realized USERS, a play talking about our times, tightening to a forthcoming future whose threshold we imagined to cross. A future where everything already happened in an incredible and irreparable way, as in a déjà vu. Stories of men, of their mortal lives and existences; epic names, such as the Trojan princes and Achilles, the Greek warrior…when knowledge migrated from the sea and among the seas and finally, stories became legends: the Trojan Horse. The audience, “offline voyeurs”, observes characters’ daily lives: “Hector”, “Cassandra’s” brother, and his wife “Andromache”, “Eleno” and “Pentesileas” the Amazon, who lost in this social network enormous virtual world, will finally find their lost identities.

The USERS key to the reading must be found in the inner sense of this metaphor: surfing the net, exchanging information, the risks of fake identities, virtual life, and the most frightful enemy “The Trojan Horse”. A play aimed at young people and adults in order to provide them with the right weapons to detect risks and dangers of the new technologies and think about their impact on our daily lives, through myths and metaphors.

It is a modern myth – modern life is changing, shifting gradually into virtual worlds. HYPERTROJA WONDERLAND is the most secure server in the world, it promises what reality has lost:  living space, unlimited possibilities, the prospect of veracity. Life in cyberspace is easier, nicer, better, so they say. But as easy as it is to reinvent oneself in a virtual environment, it is as easy to destroy these spaces and identities. But as the historical counterpart, the ancient Troy, HYPERTROJA WONDERLAND will be destroyed as well. Cassandra cries, her warnings fabe away unheard …

Author Felix Kracke and director Marcel Kohl developed a performance for the progressing metamorphosis of human life into the digital world: development of communication, entertainment, goods, money and emotional currents. The performance follows the structure of the Trojan War, from Helena’s escape from Sparta to the cunning of the Greeks and their unauthorized access to Troy, through a false identity.

HYPERTROJA WONDERLAND tells about humankind: its love and grief, its envy and hatred, and the fact that in the digital world we are still the ones that talk, write, act, love, hate, kill. In the past as ell as in the present we humans are our own enemy.

HYPERTROJA WONDERLAND is directed by Marcel Kohl. The texts are from fledgling writer Felix Kracke.

Dates for the Play:

After the school play we plan to have a discussion with teachers and students. The School Play is free of costs.

Because there is limited seating, we like you to order/reserve your tickets in the Theaterhaus Jena under info@theaterhaus-jena.de or 03641 88 69 – 44.

The implementation of the performance was created in collaboration with the Theaterhaus Jena, the Bewegungsküche e.V., Carpe Noctem and with the Thüringer Volkshochschulverband e.V..

Troy is the name of a good secured platform of network activists who are well known and celebrated for their “Leaks”. Just recently they pulled off a momentous coup by uncovering significant information of a Big Player of the international economy system. But the empire strikes back. Harder. By all available means. Mercilessly. The network security is relative. The hunters become the hunted. Their data trace puts them in jeopardy. Who is friend and who an enemy?

The theater group of the Regenbogen e.V. Ilmenau and die TheaterLeiterTheater AG developed a theater play which revolves around the topic violence and risk in the internet.

The audience is invited to attend when the battle for Troy in our modern, on technology-based time erupts again. Hacker attacks, fake identities, the misuse of data and cyber bullying – all these are issues which we will encounter in TROY.

The implementation of the performance created in collaboration with the theater group of the Regenbogen e.V., the AG TheaterLeiterTheater of the Kuko e.V. – TU Ilmenau, the adult education center (VHS) Arnstadt-Ilmenau and the Thüringer Volkshochschulverband e.V. .

The 4 chatters JUDITH, NAEMI, PATRICK and FLORIAN have applied themselves at the TV broadcasted real-life-web-show „Channel Troy“ as chatter-candidates who can win a special price by being voted (counting „likes“) by the audience (before the performance is starting, there will be handed out 2 signs for voting to each spectator: the facebook symbols ,like‘ and ,dislike‘).
The candidates have been chosen out of an enormous amount of applicants via a chat-roulette system. They login and create their own internet profiles including nicknames referring to the mythology of Troy (Andromache, Penthesilea, Heleno, Hektor).
Whilst they‘re fighting for „likes“ within their chat-dialogues, each of them is invited to the life-show. There Ruth is taking interviews with them to let the audience find out what the real person behind their chat identity might be.

Within the studio also there is GINA, the online correspondent, whose task is to summarize the characters to the audience. Off-target, she is an engaged reporter, who likes to throw light on the variant positive usabilities of the world wide web. In this position we will see, wether the editorial stuff of the studio will have her hands (speech) off approach…

Our characters are involved in a game of beeing personal and fighting to be a winner at the same time, which makes the tv genre, they are in, to be their personal crucial test. There will be different ways of dealing with it untill the studio invites Hektor/Florian, who uncovers the tv-formate as a user, who uses it himself. After this, Penthesilea/Naemi fights for rights by taking someone hostage out of the audience to the chatroom. This action rises up a contreverse discussion among the chat-members and we will see, what they will win or loose when they enter the studio all together the first time to get into „real“ contact with the audience.

The Internet is without a doubt a fascinating land, provocative, worthy of calling itself a “miracle” of technology.

Exactly by its numerous positive and revolutionary attributes, but also its capacity of “luring”, the Internet and virtual world may become in control, and users become slaves.

The Internet and new technologies have revolutionized communicational, socialization and shopping behavior, but they have also changed the users’ expectations and way of thinking.

Although we are actually speaking of the same world, the same needs, the same people, the same relationships amongst them, what new technologies have changed profoundly are the rules of the “game” and the level of certainty that we can have in the virtual world. Some elements are new, but ready to be discovered and we can make this a good educational exercise.

The play “Decoded” encompasses  the mysteries in front and behind the computer monitor and the characters seem to hide many secrets both online and offline. In the play, the heroes in the legend of Troy come to life and enter our contemporary world to share with us some of their wisdom. Because of the situations that unfold comparing the changes generated by the continued development of the digital environment, spectators will understand and discover real threats. Also, the play focuses on marking significant positive aspects of new technologies used in a responsible manner.

Anam is the narrator. He plays a crucial role in communication with the audience. His words illuminate the audience and offer information necessary to understand the story beyond the actual situation of the characters.

Priam is the king of Troy. Although he does not use social networking sites he knows the potential risks and wants, being aware of the danger, to support the young members of this citadel to reach a high level of awareness.

Yahoo Messenger, Email, Skype, Facebook, Twitter, MySpace, forum, blogs, spyware, viruses are just some of the problems our heroes encounter. Even though some elements might be new for those who did not grow up in this digitalized world, Priam knows that the dangers are the same.

The other characters you will recognize on first site. They appear frequently on social networking sites and in the fascinating world of the Internet, but they always hide behind perfect profiles. The challenge for the public will be to discover Who and how these characters are in real life… Does the virtual world correspond with reality?

We’ll just have to watch Decoded together and unravel the mystery!